Tag Archive for: homes at foxfire 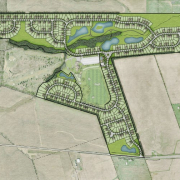 For the third time in five years, the Columbus-based homebuilder is turning a golf course into a subdivision.

M/I Homes has bought the former Foxfire Golf Course in Commercial Point with plans to build 416 homes on the 154-acre site. Homeowners in the community, to be called the Homes at Foxfire, will have access to the adjacent Players Club at Foxfire golf course, including its pool, clubhouse and playground.

This is the third time M/I Homes has converted a golf course into a community, following its acquisition of Minerva Lake Golf Club (now M/I’s Village of Minerva Park) and the Riviera Golf Club (now Riviera Regency).

“The pros of working in golf courses is they have really nice topography, landscaping; they’re very open. You can work with the natural beauty and features of the ground,” said Josh Barkan, vice president of land for the Columbus division of M/I Homes. “The other nice thing about Minerva and Riviera and Foxfire is their proximity to services.”

M/I plans to offer seven of its “Smart Series” of homes in Foxfire — four two-story models, from 1,800 to 2,600 square feet and three ranch models ranging from 1,600 to 1,900 square feet, said David Balcerzak, vice president of sales and marketing for M/I’s Columbus Division.

Prices haven’t been set, but Balcerzak said homes are expected to start in the low- to mid-$300,000s.

M/I has broken ground on the project, which is in the Teays Valley school district, and hopes to have a model in place by the first of the year with the goal of opening the community in May.

Golf courses have struggled in recent years to attract members, who have more options and less time than they might have during golf’s heyday. In the past few years, several central Ohio courses have been sold or closed.